Symptoms and tactics of treating rheumatoid arthritis with folk remedies

Rheumatoid arthritis refers to an autoimmune disease affecting the connective tissues of the joints.

The reason for the appearance of the disease is considered a bad ecology, poor-quality food, dirty water, a wrong lifestyle, the presence of bad habits, as well as the transmitted infectious or respiratory diseases.

Rheumatoid arthritis is most common in elderly and middle-aged women.

There are no exact reasons for the occurrence of this disease, but so-called triggers that contribute to the onset of the disease have been established by physicians. These are:

The psychosomatic reactions of contribute to the occurrence of rheumatoid arthritis. According to researches of doctors, the disease often arises from experienced strong emotional upheavals.

Also in the course of research, characteristic features were revealed for people suffering from this disease - emotional restraint, the ability to mask anger, irritation and any other negative reactions.

Autoimmune reactions of the organism are incorporated in human genes, so the cause of the disease can be a violation in their structure.

In this case, lymphocytes begin to attack the joints cells instead of viruses and harmful cells. This causes inflammation.

Such reactions can be caused by changes in the structure of genes under the influence of viral infections.

For rheumatoid arthritis, the following symptoms are characteristic:

In addition, a person feels general weakness, loses weight, body temperature rises, limbs numb, burning in the eyes appears, muscle atrophy occurs. These symptoms are characteristic of the later stages of the disease.

Diagnose the disease on the basis of a general blood test and biochemical analysis, perform joint radiography, make synoviocytogram and synovial sheath biopsy.

Unfortunately, it is impossible to completely cure rheumatoid arthritis. Treatment is carried out on the basis of complex therapy. Its main task is to remove the inflammation of the joints, reduce the pain syndrome, and also return partial mobility to the joints.

Drug treatment involves the reception of steroid and non-steroid preparations , which contribute to reducing inflammation and reducing the permeability of the vascular wall. To suppress the immune response, use of imarant, crisanol and other basic drugs.

If necessary, take pills for normalization of internal organs.

In addition to medical treatment, patients are prescribed exercise therapy, physiotherapy, massages .In rare cases, with severe deformity of the joints, patients are offered surgery intervention.

How to treat intestinal dysbiosis in adults at home? Read in this article.

The medication treatment is well combined with the use of folk remedies for the treatment of rheumatoid arthritis.

First of all, the body tries to cleanse of toxins and toxins by carrying out unloading days, cleaning the intestines and observing diets.

These agents affect the body from the inside, cleaning it. Also use a variety of tinctures and decoctions.

The chestnut flowers are poured with vodka in a proportion of 2 to 1. The mixture is insisted for two weeks in a dark place. A strained tincture is taken 5 drops three times a day for an hour before a meal.

Decoction of leaves of cowberry is prepared for one day of reception. Take 2 teaspoons of cranberry leaves for a glass of water and simmer for 10 minutes. The resulting broth is taken by the throat, drinking during the day.

Coniferous balm is also useful in treatment. To make it, you need 40 grams of pine twigs, 2 tablespoons of rose hips, a clove of garlic, a tablespoon of peeled onions. All components are poured in two liters of water and boiled for half an hour, after which the broth is infused for 24 hours in a warm place. Infusion is taken during the day( up to 1 liter per day).

As a local for the treatment of rheumatoid arthritis at home,

Compresses and ointments as folk remedies for the treatment of rheumatoid arthritis are used most often.

Such a compress is recommended to be done within a week. It helps to relieve pain.

Ointments for the treatment of rheumatoid arthritis can also be prepared at home.

Infusions of are also used to wipe joints.

Patients with rheumatoid arthritis should carefully monitor the supply of .It is necessary to abandon bad habits, to eat at least 3-5 times a day, avoiding starvation and overeating.

It is also recommended to perform light physical exercises, yoga, athletic walking, gymnastics or swimming regularly for the general strengthening of the joints.

What is not recommended?

If you suspect a rheumatoid arthritis, you should immediately consult a doctor. Only he can accurately diagnose the disease and prescribe the necessary treatment. In no case should not be treated at home based on personal observations and assumptions.

Only a doctor, carefully selecting the necessary medications, will be able to advise a suitable treatment that will prevent further destruction of the joints.

Also in this case, in no case is it recommended to apply painful compresses to sick joints!

Chamomile Pharmacy: useful properties and contraindications for use.

How to cure varicose veins with folk remedies? Read in this article.

The main prophylaxis in the treatment of rheumatoid arthritis is the ability to avoid any unpleasant factors contributing to the development and the onset of the disease:

It is also desirable to lead an active and healthy lifestyle and eat right. 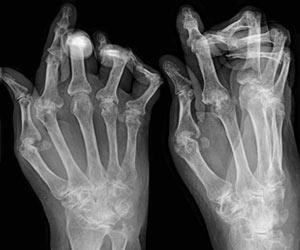 Rheumatoid arthritis, although a rather unpleasant disease, but with proper care and timely treatment, as well as with a healthy lifestyle, it will not bring much discomfort.

The main thing is to find the disease in time and make the right treatment program.

Characteristic symptoms and methods of treatment of varicose veins in women

Apple cider vinegar from varicose veins: how to use, is there any benefit?