Endometriosis of the cervix: how to treat?

Often hearing such a diagnosis as endometriosis, women do not know the true meaning of the word. To date, this disease occurs quite often, in addition, the age of the pathology significantly younger. Previously, the ailment suffered mainly women of childbearing age, and now the disease is often found in young girls. In this article we will consider what constitutes endometriosis of the cervix, symptoms and treatment of the disease, as well as features of pathology.

So, endometriosis of the cervix, what is it? The disease is a pathological proliferation of the functional layer of the mucosa beyond the body. In most cases, the disease is observed in women aged 25 to 50 years, as well as patients who underwent surgery in the genital area.

Important!According to medical statistics, the disease occurs 1.5 times more often in women after 40 years who do not have children.

Early diagnosis of the disease is rather difficult. A doctor's examination does not always provide an opportunity to identify an ailment in its early stages. This leads to further development of the disease and its complication.

Why the disease develops

It is sometimes difficult to pinpoint the causes of endometriosis development. In addition, there is no clear idea of ​​the factors that provoke the disease to date. There are a number of assumptions that are not officially confirmed in practice. They include:

Main manifestations of the disease

Endometriosis of the cervix in women is accompanied by many signs. Symptoms can be of the following nature:

A competent specialist when referring to the patient conducts an examination, regardless of the signs of the disease. For an accurate diagnosis and a clear idea of ​​the status of the uterus, ultrasound is performed. This method allows you to determine whether the uterus is enlarged in volume, the extent of endometrial overgrowth and some other features.

Important!After the end of menstruation, most women note the disappearance of pain and their absence. This is the reason to postpone the trip to the doctor.

What is the danger of endometriosis for women?

So, how dangerous is this ailment for women's health, and why is it so important to treat the disease? The fact is that the complications of the disease often lead to disastrous consequences. Many patients because of untimely or incorrect treatment of ailment lose the opportunity to bear and give birth to a child. According to medical statistics, more than 60% of women after suffering a pathology have difficulty in conceiving a child.

A frequent complication of the disease is miscarriage. Even after curing endometriosis, it is quite difficult to make a baby. That is, when answering the question of whether it is possible to become pregnant with endometriosis of the cervix, a positive response follows, but the child's bearing is exposed to significant risks. During the entire period of pregnancy, the expectant mother should regularly visit the women's consultation, monitor their diet and daily routine.

Many women, faced with such a diagnosis as endometriosis, are concerned about the question of how to treat the disease? So, let's try to figure it out. In modern medicine, the therapy of this disease can be carried out in two forms. This is the use of medications, as well as treatment through surgery.

One of the causes of the development of a disease is the violation of the hormonal background of a woman. This happens for various reasons and it is very important for the successful cure of the disease to bring the level of hormones back to normal. The following preparations are used for this:

Through the use of hormones, it is possible to stop the growth of the endometrium, limiting its nutrition to healthy tissues. After the course, the ailment passes into a latent form, an increase in the endometrium in volumes and a complete halt in its growth. However, the peculiarity of such therapy is that, when other provoking factors appear, the pathological growth of the functional layer may resume.

Important!Every woman should carefully monitor their health after treatment. This will help to avoid complication of the disease in the future.

In severe forms of endometriosis, treatment with surgery is performed. The surgeon cuts the affected areas with a scalpel. After this, hormonal therapy is carried out, which contributes to the normalization of the level of female hormones in the blood.

Also one of the modern methods is laser treatment. Using special equipment, removal and burning of affected areas is carried out.

Important!In some cases, the uterus is completely removed. Such operations are carried out with strong lesions of the genital organ and the risk of serious consequences.

Application of methods of folk therapy

Often, the disease is treated with folk remedies. For this, it is recommended to use natural materials with anti-inflammatory, healing and restorative action. Well-proven syringing decoctions of the following herbs:

Another way to get rid of the disease is the use of propolis. For this, candles and tampons are used based on this product.

Important!Before using propolis, you need to make sure that there is no allergic reaction of the body to this product.

Endometriosis is a complex disease requiring immediate treatment. Timely diagnosis and adequate therapy of the disease will help reduce the risk of complications and severe consequences. 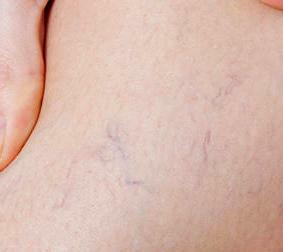 Varicose veins on the legs: symptoms and treatment