Rubella in children is a widespread acute infectious disease characterized by a skin rash and enlarged lymph nodes.

Mostly sick children between the ages of two to nine years who have not been vaccinated against measles. As an ailment adults can also be ill, but in childhood it is easier to bear. The special danger of rubella is the first three months of bearing a child. This can cause birth defects in the development of the baby, in rare cases - the death of the fetus inside the mother.

The source of infection can be any infected person with a pronounced or latent form of rubella. It is transmitted, like many other viral infections, by airborne droplets. You can also get infected with an infected person. He can become a carrier of infection, not yet realizing it. After all, the rash on the body appears only seven days after infection and the patient is considered to be the carrier of the infection, the next seven days after the rash on the body appears.

Today you will learn what to do with rubella in children: consider the symptoms and treatment, as well as photos of the initial stage, do not forget to mention and prevent this disease.

The virus is transmitted by airborne droplets. Penetrating into the body through the mucous membrane of the upper respiratory tract, the virus primarily multiplies in lymph nodes, from which even in the incubation period (1 week after infection) falls into the blood.

Symptoms of rubella in children

In the case of rubella, the symptoms in children begin to appear 10-20 days after the infection - this is the incubation period. Already a week before the eruption appears lymphadenitis of the cervical and occipital lymph nodes, which are painful on palpation.

The main and permanent symptom of rubella is the appearance of a rash, first on the face and upper body, on the next day - on the buttocks. Elements of the rash exceed 3-5 mm in diameter, do not tend to merge.

It happens that the rash at first glance is almost invisible, especially if its face does not. Most of the rash in the lower back, buttocks, on the hands and feet. Thus the child does not feel an itch and a dyscomfort. On the average, the rash lasts 3 days, then completely disappears.

Rubella in children can be accompanied by such symptoms:

In some cases, the disease can occur without the appearance of a rash (erased form). In this case, it is difficult to put an accurate diagnosis of a child and helps only the study of blood for the presence of antibodies. Throughout this period, the child is contagious. Even if the child does not have rashes, it is still contagious to others.

Internal organs with such a disease as rubella do not hurt, there are, however, exceptional cases, when a severe tachycardia occurs in severe fever, and muffled heart sounds are heard.

We offer to view detailed photos, so that it becomes clearer what the rash looks like with this disease.

Rubella in children under one year of age

As a rule, rubella in infants is not found, because they have acquired immunity, received from the mother. The exception is children with congenital rubella. If the mother has had it during pregnancy, the virus can be in the body of a baby up to two years.

The difference between rubella and measles and scarlet fever

In measles, unlike rubella, fever, fever and intoxication are observed. With measles, the rashes are located in groups, merge into large papules - this is not present in rubella.

Scarlet fever also has a number of specific signs. First, rashes in scarlet fever are smaller in size, they arise against a background of light, healthy skin.

With rubella, specific treatment in children is not carried out. Sometimes symptomatic drugs are prescribed.

When the nature of the disease is established, the child is treated at home. Bed rest is prescribed only at high temperature, in other cases it all depends on the child's well-being. Isolation from the team is shown for 5 days after the onset of the rash.

You should give the patient more than any liquid (juices, compotes, kissels, tea with milk), often air a room, wipe the dust, wash the floors. For the period of rashes it is recommended to take calcium preparations in the age-related dosage. After the disappearance of signs of the disease the child can take multivitamin preparations.

At present, scientists do not know how to treat rubella in children with the help of specific antiviral drugs. They simply do not exist. Antibiotics for this infection are not effective. They are prescribed only in case of complications, with lymphadenitis, angina and pneumonia.

If the child has suffered this disease, then the second time she is unlikely to get sick. The only exception is children with immunodeficiencies, who generally have immunity problems.

In general, the prevention of rubella in children is divided into active and passive measures.

Patients with severe symptoms are isolated until full recovery, but not less than 5 days from the onset of the disease. The first patient with symptoms of rubella in a children's institution is recommended to isolate up to 10 days from the beginning of the rash. In some cases (if there is a family, a team of pregnant women), the separation period should be extended to 3 weeks. The impact on the mechanism of rubella transmission during treatment consists in airing and wet cleaning of the room, the ward where the patient is.

Contact children under the age of 10 years who did not suffer from rubella are not allowed to be sent to children closed institutions (sanatoriums, children's homes, etc.) within 21 days from the moment of separation from patients.

Specific prevention of rubella in developed countries is done by routine vaccination with a live, associated vaccine against measles, mumps and rubella. In addition, there are monovaccines. Vaccination is performed twice, for the first time at the age of 12-16 months, then revaccination at 6 years. In addition, teenage girls and young women are often re-vaccinated.

In the overwhelming majority of cases, the prognosis is favorable, the disease ends with complete recovery without any consequences. The prognosis is worse in the case of development of rubella encephalitis.

Of particular importance is rubella in obstetric practice. The transmission of infection by the mother can have extremely unfavorable consequences for the fetus. The variety of possible fetal malformations (congenital cataract, deafness, heart defects, microcephaly, etc.) with rubella of pregnant women is wider the earlier infection was.


How to choose probiotics for the intestine: a list of drugs. 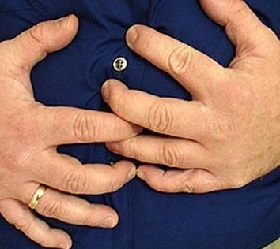 Why dark feces: causes in adults

Why is the upper pressure high, and the lower normal pressure

Bloating after eating - causes and treatment in adults