Ringworm in a person - symptoms and treatment, photo 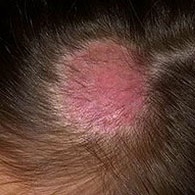 Everyone has heard of such an infectious cutaneous disease as ringworm, but not everyone knows how to identify its symptoms and identify the disease in the initial stage (see. a photo).Let's try to do this, based on the current knowledge of dermatologists, reviews about the disease and the methods of treatment described in the literature.

Ringworm (microsporia) - a fungal lesion of the skin, hair, nails, which can infect everyone. It is caused by the fungi microsporum and trichophyton. This is a well-studied type of lichen. This skin pathology is called microsporia and trichophytosis (depending on the pathogen). Trichophytosis one person can catch from another, microsporia - from the animal.

What it is? Ringworm in humans can be caused by anthropophilic fungi, that is, those that parasitize only in the human body. Often there is ringworm in children, when they play with animals or just help them take care.

Characteristics of ringworm, first of all, includes damage to the hair (including whiskers), smooth skin of varying degrees of depth penetration and nails. All symptoms of ringworm are visible to the eye, their description is quite informative, but not very aesthetically.

Ringworm, the disease is infectious andcan be transmitted in several ways:

Risk factorsincrease the chance to catch a fungus, this is:

In humans, the first signs of shorn hair loss are felt for two weeks, after which the disease begins to affect the skin. To correctly determine the type of lichen, a person must undergo an examination with a dermatologist.

Symptoms of ringworm in humans

The incubation period of ringworm can last from several days to 1.5-2 months. It all depends on the type of fungus. What does ringworm look like? The disease in most cases has pronounced symptoms that can be easily noticed with the naked eye:

Any area of ​​the skin and head can be affected. When there is a hair loss on the scalp, the first symptoms can be overlooked. Gradual hair loss occurs, they become brittle at the base. The skin begins to peel, itching. After 7-10 days, clear boundaries of the lesion are visible, occupying a large area. Around vesicles pour vesicles with purulent contents. Hair starts to fall even more strongly, on the ends the gray deposit is swept up.

Nails are affected by ringworm much less often than skin. Clinically, this is manifested by the appearance of white spots on the outer edge of the nail. After a while the nail in this place begins to soften and crumble.

The chronic form of ringworm is a disease common only among women who have not cured superficial ringworm since childhood. Usually, it manifests itself in cases when a woman has thyroid disorders and ovarian function, as well as with avitaminosis and general exhaustion of the body.

Ringworm in humans: photo of the initial stage

In order to understand exactly what the ringworm in a person in the initial stage looks like, we offer a detailed picture of the affected areas of the skin in humans.

The diagnosis is based on a visual examination of the patient, as well as the collection of an anamnesis of the disease and a survey of possible sources of infection. In case of doubt, the doctor performs scraping from the affected area.

The collected materials are examined under a microscope or placed in a nutrient medium for three days, during which a rapid growth of the fungal colonies is observed. When detecting filaments of mycelium and spores of a fungal pathogen, its identification is made.

Treatment of ringworm in humans

When ringworm occurs in humans, the basis of treatment is the fight against the fungus that caused dermatomycosis. The course of treatment is prescribed only by a doctor dermatologist, and is carried out at home. It combines local therapy with ointments from lichen - antifungal creams, sprays, shampoos with the intake of antifungal drugs inside.

For the treatment of ringworm, the following drugs are effective:

In the event that a fungal infection affects the smooth skin, patients are prescribed external antifungal preparations, as well as alcohol solution of iodine, sulfuric and sulfur-tar or sulfur-salicylic ointment. With the development of a pronounced inflammatory process, the administration of combined preparations containing hormones is indicated.

If the scalp is injured, the hair should be completely shaved before the procedures start, after which is carried out antifungal therapy using etiotropic drugs of systemic action. In this case, the antifungal antibiotic griseofulvin is most often prescribed. It should be noted that the course of treatment should be under the control of a fluorescent lamp.

After the termination of treatment of a ringworm again surrenders a scraping on bacterial analysis from a surface of a skin in places, where he used to be deprived, he is given 3 times - immediately after the treatment, in a week and in 2-3 months. Only if all 3 analyzes give negative results, ringworm is considered cured. If the results are positive, then the course of treatment should be reviewed and another scheme should be prescribed.

Symptoms and treatment of pharyngitis in children

How to cure tooth decay at home