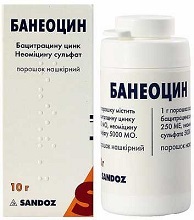 Baneocin is an antibiotic that is used only externally.

On this page you will find all information about Baneocin: the full instruction on the application to this medication, the average prices in pharmacies, complete and incomplete analogs of the drug, as well as reviews of people who have already used Baneocin powder. Want to leave your opinion? Please write in the comments.

The drug with antibacterial action for external use.

How much does Baneocin powder cost? The average price in pharmacies is at the level of450 rubles.

The drug Baneocin is sold in the form of powder and ointment.

The active substance of the drug in question is the antibacterial agent baneocin in combination with neomycin - also an antibiotic. Their mutual enhancement of action and explains the high effectiveness of the drug.

Bacitracin is active against gram-positive (Streptococcus spp. / incl. hemolytic streptococcus /, Staphylococcus spp.) and some gram-negative microorganisms. Resistance to bacitracin is rare. Has good tissue tolerance; Inactivation by biological products, blood and tissue components is not noted. Neomycin is active against gram-positive and gram-negative bacteria. By using a combination of these two antibiotics, a broad spectrum of action of the drug is achieved and synergism of action against a number of microorganisms, for example, staphylococci.

According to instructions Baneocin is applied:

Absolute contraindications to the treatment with powdered Baneoocin are:

Use with caution in situations:

Application in pregnancy and lactation

In cases where it is not possible to control the absorption of the drug in pregnant and lactating women, Baneoecin should be used with caution. Like all other aminoglycosides, neomycin penetrates the placental barrier. At systemic use of aminoglycosides in a high dose, development of damages of the cochlear apparatus in the fetus was noted.

The instructions for use indicate that adults and children from the first day of life are given a thin layer of the drug on the affected areas 2-4 times / day; if necessary, under the bandage.

When applied topically to the skin, mucous membranes and wound surfaces, Baneocin® is usually well tolerated. In patients who have been using the drug for a long time, allergic reactions can develop in the form of redness and dryness of the skin, skin rashes and itching. Allergic reactions mainly occur according to the type of contact eczema and are rare. Approximately 50% of cases are associated with a cross-allergy to other aminoglycoside antibiotics.

When treating patients with extensive damage to the skin, it is necessary to consider the possibility of absorption of the drug and, as a result, the appearance such complications as vestibular and cochlear apparatus damage, nephrotoxic effect and blockade of neuromuscular conduction.

Until now, there have been no known cases of drug overdose.

The use of the drug does not exclude the possibility of the integrated use of other drugs.

With a similar effect on the skin (stopping the inflammatory process, cleansing the skin of pathogenic microflora), the effect of Baneocin increases, and when administered in parallel with some types of relaxing substances of narcotic and non-narcotic effect, there is a high probability of paralysis due to worsening of the transmission of nerve impulses to the muscles.

We picked up some feedback from people about the Baneocin drug:

Ointment and powder Baneocin do not have synonyms (that is, preparations containing the same active substance). However, there are a number of analogues - drugs that have a similar therapeutic effect, but contain other active components. Analogues of Baneocin include the following drugs:

Baneocin is stored for 2 years in a dry place, protected from light at a temperature that does not exceed + 25 ° C. It should be ensured that the drug does not fall into the hands of children.

Tablets and syrup Pantogam: instructions for use for children and adults

Solution and tablets Dicinon: instructions for use