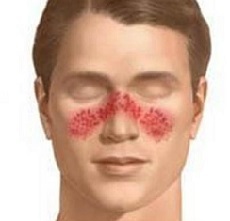 Systemic lupus erythematosus is a chronic autoimmune disease characterized by connective tissue damage and vessels and, as a consequence, involvement in the pathological process of virtually all organs and systems of the body.

In the development of systemic lupus erythematosus, a certain role is played by hormonal disorders, in particular, an increase in the amount of estrogens. This explains the fact that the disease is more often registered in young women and adolescent girls. According to some data, in the emergence of pathology, an important role is played by viral infections, intoxications with chemicals.

This ailment relates to autoimmune diseases. Its essence lies in the fact that the immune system starts to produce antibodies for some stimulus. They adversely affect healthy cells, as they affect their DNA structure. Thus, due to antibodies, a negative change in connective tissue and vessels occurs.

What causes contribute to the development of systemic lupus erythematosus, and what is it? The etiology of the disease is unknown. In its development, the role of viral infection, as well as genetic, endocrine and metabolic factors is assumed.

Patients and their relatives have lymphocytotoxic antibodies and antibodies to double-stranded RNA, which are markers of a persistent viral infection. In the endothelium of the capillaries of damaged tissues (kidneys, skin), virus-like inclusions are detected; on the experimental models the virus was identified.

SLE occurs mainly in young (20-30 years) women, but cases of the disease are common in adolescents and older people (more than 40-50 years). Only 10% of men are affected, but the disease is more severe for them than for women. The provoking factors are often insolation, drug intolerance, stress; women - childbirth or abortion.

The disease is classified according to the stages of the disease:

Also during the disease, three main stages are distinguished:

Systemic lupus erythematosus is characterized by lupus crises, in which the activity of the disease is maximal. The duration of the crisis can be from one day to two weeks.

At the initial stages of the disease, lupus erythematosus is characterized by a continuous course with periodic remissions, but almost always turns into a systemic form. Often there is erythematous dermatitis on the face like a butterfly - erythema on the cheeks, cheekbones and always on the back of the nose. Appears hypersensitivity to solar radiation - photodermatosis is usually rounded, are of multiple character.

The defeat of joints occurs in 90% of patients with SLE. In the pathological process involved small joints, usually fingers fingers. The defeat is symmetrical, patients are concerned about pain and stiffness. Deformation of the joints is rare. Aseptic (without an inflammatory component) necrosis of bones are common. The head of the femur and the knee joint are affected. In the clinic symptoms of functional insufficiency of the lower limb predominate. When involving the pathological process of the ligamentous apparatus, unstable contractures develop, in severe cases dislocations and subluxations.

Defeat of the cardiovascular system:

With lesions of the nervous systemthe most frequent manifestation is asthenic syndrome:

It is almost impossible to assume lupus before going to the doctor. Consult for advice if you have an unusual rash, fever, joint pain, fatigue.

How does systemic lupus erythematosus look like, we offer detailed photos for viewing.

The system includes the following criteria:

The main goal of treatment of systemic lupus erythematosus is the suppression of the autoimmune reaction of the body, which underlies all the symptoms. Patients are assigned different types of drugs.

Unfortunately, a complete cure for lupus is not possible. Therefore, therapy is selected so as to reduce the manifestation of symptoms, to stop the inflammatory as well as autoimmune processes.

The tactics of treating SLE are strictly individual and can change with the time of the disease. Diagnosis and treatment of lupus - often combined efforts of the patient and doctors, specialists of various specialties.

Modern drugs for the treatment of lupus:

If you suffer from lupus, you can take several steps to help yourself. Simple measures can make exacerbations less likely, and also improve the quality of your life:

The prognosis for life in systemic lupus is unfavorable, but the latest advances in medicine and the use of modern medicines give a chance for an extension of life. Already more than 70% of patients live more than 20 years after the primary manifestations of the disease.

At the same time, doctors warn that the course of the disease is individual, and if one part of the patients develops SLE slowly, then in other cases, the rapid development of the disease is possible. Another feature of systemic lupus erythematosus is the unpredictability of exacerbations, which can occur suddenly and spontaneously, which threatens with severe consequences.

Thrush in women - symptoms and treatment