Causes of brown secretions instead of monthly 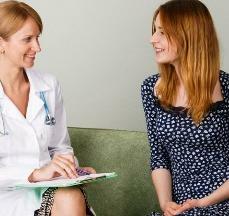 Women who follow their health know their menstrual cycle and the time of onset of menstruation well. Therefore, they will immediately notice their absence or brown secretions instead of monthly ones, the causes of which can be very serious.

If you observe a brown smear during not one, but several cycles in a row, then do not delay the visit to a gynecologist. Consider several options for the onset of such cases, and try to figure out what this means.

Separations depending on age

Girls from 12 to 14 years outwardly develop quickly enough. But nature can not be deceived, and the first couple of years after the onset of menstruation, their body presents surprises in the form of an irregular cycle and a strange color of discharge.

If the girl feels well, that is, does not experience severe pain in the critical days and immediately before them, her psychological state does not go beyond the limits of the norm, then the brown ones do not cause excitement. However, if this phenomenon continues all the time, this is the reason for calling a gynecologist for advice.

In the reproductive age, scant brown discharge, instead of the monthly ones, can become an alarming signal of a violation in the genital area. Also, spotting instead of menstruation can talk about pregnancy. If the test is negative, it is possible that the time is too short and the test will not show two strips, but a brown daub is said about the threat of miscarriage.

Also in the premenopausal period in women after 40 years of age (see Fig. the first signs of menopause), the allocation of brown color instead of the monthly ones are permissible and are caused by the natural extinction of ovarian function, a decrease in the hormonal background.

There may be several different causes for the appearance of brown secretions, among which there can be both serious pathologies, leading to serious consequences, and absolutely safe situations, which should not be worried.

Belowpathological factors are listed, leading to the appearance of brown secretions instead of monthly:

For a more accurate determination of the cause of this phenomenon,need to clarify:

If you are young, do not prepare to become a mother, do not take hormonal drugs and other hormonal contraceptives, for example, novarizing, and menstruation constantly have a meager character, do not come regularly - consult a specialist, because the cause may be hormonal disorders. In this case, you will need adequate treatment.

If the pregnancy test is positive, and the woman has a scanty period, this is not considered the norm, but indicates a lack of hormones necessary to maintain pregnancy. The time when supposedly should be monthly are days of increased danger to the child, so it increases threat of termination of pregnancy, these days the level of progesterone is reduced and there may be a detachment of the endometrium.

To make sure that a woman is pregnant, you should take an analysis for hCG and make a pregnancy test. Also, one of the causes of brown spotting discharge may be an ectopic pregnancy instead of a monthly one, the test shows a positive result.

Dark brown secretions instead of monthly can also arise as a result of taking hormonal contraceptives or performing any gynecological operation.

In the first case, menstruation generally becomes meager and short, and in the second case, it may be about the development of an inflammatory process after surgery or a side effect of a drug prescribed by a doctor in the postoperative period. In both cases it is necessary to consult a specialist.

Dark brown discharge instead of monthly

To the appearance of dark brown secretions instead of menstruation may lead to stress. In the case of increased stress and nervous exhaustion, a woman may experience this phenomenon.

In addition, the failure of ovulation, which leads to stable smoking, a large number of consumed alcohol and the frequent occurrence of ARI, is also the cause of dark brown discharge. They manifest themselves as smearing scant excretions in the middle of the cycle.

What to do with such a problem?

To begin with, a woman should find out if she is pregnant. It is also worth analyzing the way of life and the psychological situation, which could undermine health and provoke a malfunction.

Those who have cycle disorders, need to eat a full way: there are products that are rich in protein, as well as a large the number of vegetables and fruits, abandon bad habits and guarantee yourself the longest possible sleep and rest.

The causes of the problem, when brown discharge instead of the monthly ones, can be serious diseases of the female reproductive system, for example endometriosis or uterine myoma. Therefore, in any case, a woman should not make her own conclusions - whether such discharge is the norm or they speak about some pathology, it is necessary to visit a gynecologist.

The backbone hurts: the reasons and treatment what to do or make?

Massage for hip dysplasia in children

X-ray of the spine: what shows?