Pain under the right scapula: causes and treatment 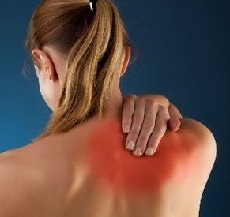 Overstepping the forty-year boundary, almost every one of us knows the cause of aching pain in the sternum and under the scapula on the left side. In eighty percent of this way, the back or heart signals any disruptions in their work or elementary overwork.

But the causes of pain under the scapula on the right side usually remain beyond our understanding. As a rule, in this area there are so-called irradiation pains that are localized at a distance from the focus of inflammation. But an experienced specialist can fully understand the true cause of unpleasant sensations in this area.

Causes of pain under the right scapula

What does it say? The pains localized under the right scapula behind from the back are most often signs of the following diseases:

Also, the cause of discomfort under the right scapula can be determined by the nature of the pain in this area:

The pains under the right scapula are dangerous in that they usually appear far from the location of the pathology. This is due to the presence of many nerve endings here, through which the signal is transmitted from a sore spot. Because of this phenomenon, called a syndrome of reflection or repercussion, it is quite difficult to establish the true cause of such pains.

Widely known is a disease such as intercostal neuralgia. It manifests itself as sharp sudden pains in the back like a lumbago, and also, dulging on the intercostal spaces, blunt aching pains.

A common cause of this phenomenon is pinching roots or viral neuroinfection. Typical for this disease is soreness with palpation of the pain zone, as well as increased pain during physical exertion, deep breaths, sneezing.

Most often, the osteochondrosis of the cervical region provokes pain under the shoulder blades, which is characterized by a smooth, calm manifestation, without acute attacks. It is able to completely disappear or become smaller when changing the position of the body.

There is discomfort due to the fact that the vertebrae take an unnatural position relative to the soft tissues of the body, jamming the nerve endings.

Hypertension of the muscles of the back, observed in people whose work is associated with a permanent unsupported sitting position, the wearing of weights and other labor that causes the stress of this part of the body.

Constant aching pain in the back area, amplified by the reflex act, disappears only after a long relaxation and the corresponding procedures.

To establish the reason of the arisen painful sensations in a scapula behind from a back it is possible only after full inspection in medical institution. Doing this yourself at home, you can only run the disease, "lubricate" the signs of the disease, which will complicate the treatment.

Therefore, in order to cure a painful symptom, no matter what character it is - acute pains or pains, pulling, stupid, you need to turn to such specialists:

The first stage, of course, can be a visit to a district therapist who will conduct a primary examination, collect anamnestic information and decide which narrow specialist to send the patient to. Radiography, general blood and urine tests, and possibly initial analgesic therapy, which removes the pain symptom, will also be prescribed.

The methods of prevention include:

Correction of a way of life will help to exclude possibility of occurrence of diseases of a backbone, a liver, kidneys and a cholic bubble.

Types of otitis in children

Drops for treatment of otitis media in adults