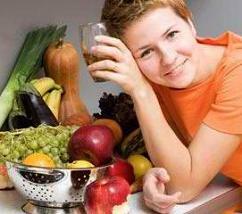 Diet in pancreatic pancreatitis as such begins no earlier than from 4 days (before only complete starvation).

According to the common classification of diets, which is used in medical institutions, proper nutrition with pancreatitis is diet № 5 Penza. Food should be taken in small portions 5-6 times a day, eliminating snacks in between the main methods.

The essence of the diet - the rejection of all products that enhance acidification in the stomach and provoke active work of pancreatic enzymes. After an exacerbation of disease doctors strongly recommend to keep to a diet during a long time - not less than 8 months.

The right diet for pancreatitis for every day is important for preventing pain attacks, or at least reducing their severity.

Nutrition for pancreatic pancreatitis should be nutritious, contain an increased amount of proteins, but a reduced amount fats and carbohydrates (in particular sugar) to prevent liver degeneration into fatty hepatosis and the development of diabetes mellitus.

It is necessary to exclude from your diet or even give up permanently from the following:

Keep in mind that the diet should be varied and include both plant food and animal protein.

You should pay attention to such products:

It is also important not to overeat, cutting the daily amount of food to 2.5 kilograms, taking into account the drunk liquid. Food is often and in small portions. Following all the rules of nutrition in pancreatitis can significantly improve the effectiveness of therapy in general.

Nutrition for exacerbation of pancreatitis

When the chronic form of pancreatitis worsens, the first 1-2 days - a hunger diet, the patient is only allowed to drink 1-2 glasses of broth of wild rose , -1 liter of alkaline mineral water of Borjomi type (1 glass 4-5 times a day). Total liquid is given in 200ml 6 times a day. In severe cases - drinking is also not allowed, nutrition is only intravenously drip.

Two days later, a special diet for pancreatitis - diet No. 5p - is introduced for the next week, which includes several options. Its goal is to reduce the formation of gastric acid and allow the pancreas to concentrate all the forces on the process of fighting for survival.

Sample menu for a week with pancreatitis

In order not to be so difficult to get used to a new way of eating, we have prepared for you an approximate menu for a week with pancreatic pancreatitis.

For convenience, allowed products can be combined, or swapped. Then your menu for a week will become more diverse.

Effective treatment of a cyst of a tooth in house conditions

The benefits and harm of dried prunes for the human body