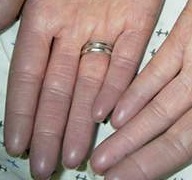 Raynaud's disease is a disease in which the arterial blood supply of the hands or feet is disturbed. The disease is paroxysmal and usually affects the upper limbs symmetrically. Women are sick more often than men.

If there are no definite reasons for the development of Raynaud's syndrome, then they say about Raynaud's disease, her obligatory sign is the symmetry of the defeat of the limbs.

Why does Raynaud's disease occur, and what is it? For the first time this disease was described by the French physician Maurice Reynaud in 1862. He noticed that the hands of many women who daily had to wash clothes in cold water had a cyanotic color. The female workers complained of frequent numbness and unpleasant tingling in the fingers.

Reynaud concluded that prolonged cooling of the hands leads to a prolonged spasm of blood vessels and circulatory disorders. However, the French doctor and his followers did not succeed in revealing the mechanism of the disease development.

Nevertheless, there are factors that can contribute to the onset of the disease. These include:

The disease manifests itself periodically under the influence of provoking factors - negative emotions or low temperatures. It is necessary for a person to go out into the cold or to be nervous, as there is a spasm of small arterial vessels of hands (less often - a stop, ears, nose). The fingers are white, they have a feeling of numbness, tingling, sometimes pain.

Depending on the stage of Raynaud's syndrome, the symptoms of the disease will progress (cf. a photo):

In the case of Raynaud's disease, the earliest symptom is the increased chilliness of the fingers - more often the hands, which are then followed by blanching of the terminal phalanges and pain in them with paresthesia elements. These disorders have a paroxysmal character and disappear completely after the attack.

The distribution of peripheral vascular disorders does not have a strict pattern, but more often it is the II-III fingers of the hands and the first 2-3 toes of the feet. The distal parts of the arms and legs are involved in most of the process, and the other parts of the body, earlobes, and the tip of the nose, are much less involved.

The course of the disease is slowly progressing, however, regardless of the stage of Raynaud's syndrome, there are cases of reverse development process - at the onset of menopause, pregnancy, after childbirth, changes in climatic conditions.

With Raynaud's syndrome, diagnosis is based primarily on patient complaints and objective data, as well as on additional research methods. During the diagnosis, capillaroscopy of the patient's nail bed is performed. It allows you to visualize and study the functional and structural changes in the arteries of the extremities. Another stage in the diagnosis of Raynaud's disease is cold tests to assess the state of the limbs after immersion in water with a temperature of 10 ° C for 2-3 minutes.

Laboratory methods used in the diagnosis of Raynaud's syndrome:

Diagnosis of this disease is established using clear medical criteria. Attention is drawn to the vascular spasm, the occurrence of which occurs during the action of cold or stress, symmetry of the manifestation of symptoms of the disease and the recurrence of spasms, which has been present for several years.

When the symptoms of Raynaud's disease appear, the treatment can be divided into two groups - conservative and surgical.

An important part of treating Raynaud's disease is limiting the patient's contact with provoking factors. With a high negative emotional load, sedatives should be taken. If you need to contact a cold and moist environment, you should dress warmer than usual, especially carefully warm your hands and feet.

If the specialty assumes long or even short-term work on the street in any weather, the question of changing working conditions should be raised. The same applies to the work associated with a constant nervous tension.

A new word in the treatment of Raynaud's syndrome is stem cell therapy, aimed at normalizing peripheral blood flow. Stem cells promote the discovery of new collaterals in the vascular bed, stimulate the regeneration of damaged nerve cells, which eventually leads to the cessation of paroxysms of vasoconstriction.

With Raynaud's syndrome, the prognosis depends on the progression of the underlying pathology. The course of the syndrome is relatively favorable, attacks of ischemia can spontaneously cease after a change in habits, climate, profession, sanatorium treatment, etc.

To prevent an attack, you need to follow certain precautions, excluding provoking factors:

When, after stress or hypothermia, a person feels the numbness of the fingertips and sees a change in the shade of the skin of the limbs, it is necessary to show the doctor. Do not self-medicate. Harmless at first glance, pathology can lead to irreversible effects in the body.

Types and causes of bursitis of the shoulder joint

Bursitis: what is it and how to treat it?