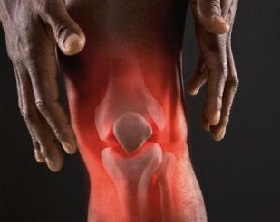 Reactive arthritis (ReA) is an inflammatory lesion of the joints, which occurs as a reaction to the invasion of any infectious agents.

It is important to note that the joint cavity retains its sterility (that is, the inflammation is aseptic).

Deep causes of ReA still remain uncovered. It is believed that the infection plays the role of a trigger, which in the presence of a genetic predisposition triggers an immunopathological reaction.

In the case of an infection associated with food poisoning, a condition called enteroarthritis occurs. One to two percent of people who have been poisoned with food, suffer from the development of the inflammatory process of the joints a few weeks after poisoning. A certain role is played by the hereditary predisposition, many people suffering from reactive arthritis have the HLA-B27 gene.

What causes the ailment?

Reactive arthritis can occur after venereal infections. The most common bacterium that has been associated with this post-venereal form of reactive arthritis is a chlamydial infection. It also occurs after infectious dysentery, when infected with bacteria such as Salmonella, Shigella, Yersinia, Campylobacter. As a rule, arthritis develops one to three weeks after the onset of bacterial infection.

Reactive arthritis most often affects people aged 20-40 years. Interestingly, after sexually transmitted infections, men are nine times more likely to get sick than women, while after intestinal infections the risk is the same. Men are slightly heavier than women. The risk is elevated in individuals who have HLA B 27, but his research before the development of the disease is not necessary.

More rarely, but still there is reactive arthritis in children. The disease is no less serious than that of adults, and can significantly affect the child's future life, especially if it is a sporting future.

Symptomatic in childhood depends on the type of arthritis, age. But the main symptoms can be identified as follows:

If the disease is diagnosed in time, the results of treatment will be positive, getting rid of reactive arthritis will pass quickly enough. In addition to antibiotics, anti-inflammatory drugs, immunomodulating drugs, very effective is exercise therapy, other health procedures. 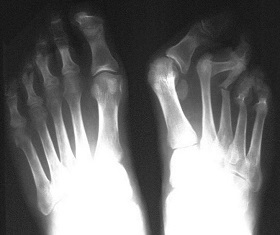 In the first two - four weeks, the patient has an intestinal disorder, acute respiratory disease, or an ailment very similar to cystitis in the initial stage.

In most cases, the initial inflammation occurs in one joint, and only then the disease affects whole articular groups. Clinical manifestations of reactive arthritis range from transient monoarthritis to a fairly severe multi-systemic disease.

Common symptoms include: weakness, general malaise, fever. The severity of these manifestations can be either quite small or very strong.

There may be polyarthritis or asymmetric oligoarthritis, which mainly affects the toes or large joints of the lower limbs. In severe disease, pain in the back is possible.

In order to understand how to treat reactive arthritis, you must first diagnose it correctly. From the accuracy and timeliness of the diagnosis, the success of all subsequent treatment will depend a lot.

In the photo, you can view the external symptoms of the disease, but otherwise you should consult a doctor if you have the following complaints:

Symptoms are sometimes deceptive and similar to other diseases and therefore it is important for a specialist to apply differential diagnosis.

Prophylaxis of reactive arthritis is reduced to the prevention of infectious diseases: hygienic procedures, proper preparation of food, observance of the shelf life of food.

When diseases occur, adequate treatment is necessary, appointed by a specialist. During the next 1-3 weeks, it is necessary to observe the protective regime and avoid re-infection.

In the case of diagnosed reactive arthritis, treatment should be carried out by rheumatologists. With its parallel development with acute infectious disease, the treating specialist can become an infectious disease doctor.

Since the triggering factor of reactive arthritis is usually infection, one of the most important points of treatment is to rid the body of these infectious agents. On how well this can be done, the outcome of the disease will depend.

Anesthetics are also prescribed to relieve joint pain, and in severe cases, glucocorticoids and immunosuppressors. Treatment of this ailment is done on an outpatient basis, hospitalization is performed only in cases when the diagnosis is unclear and requires constant monitoring, as well as with very pronounced manifestations of the disease and a general severe condition.

Prognosis of the disease

For patients who underwent complex treatment for reactive arthritis, there is the following prognosis for further life:

Only in 5% of cases the severe form of reactive arthritis leads to deformation of the spine and joints.

It is important to follow a diet. The diet should include natural omega-3 fatty acids, which are rich in sea fish and linseed oil. The diet should not contain exciting, overly sharp and salty foods.

It is noticed that some vegetables of the Solanaceae family can cause an aggravation of the disease and intensify the symptoms of reactive arthritis. Therefore, use potatoes, tomatoes, eggplant and sweet peppers with caution. The diet should be balanced: no low or high-calorie diet is indicated.