In the urine found nitrite, what does it mean? 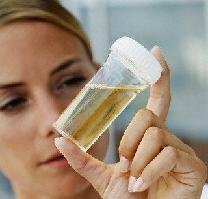 Usually doctors do not advise to decipher urinalysis by themselves. First, any business should be done by an expert, and secondly, it is important to evaluate all the indicators in a complex. But all the rules, as you know, there are exceptions.

And when the analysis of the urine of a child or adult showed the presence of nitrites, then almost certainly one should expect a bacterial infection of the urinary tract.

The causative agents may be the following bacteria: Priotus, Klebsiella, Escherichiacoli, Salmonella, Citrobacter, possibly Pseudomonas, enterococci, staphylococci. Often, nitrite in the urine is detected against a background of cystitis, pyelonephritis, intestinal infections, vaginitis.

What are nitrites, and where do they come from?

Nitrates and pathogenic microorganisms form nitrite in the urine. This means that if pathogenic bacteria enter the body, they convert nitrates (which enter the urinary tract with plant food and can normally be contained in the urine) into nitrites.

Thus, the determination of nitrite in the urine indicates that a bacterial infection develops in the genito-urinary tract. What exactly - the urologist can say, after carrying out all the necessary analyzes and studies (urine culture in the flora, ultrasound of the pelvic organs, a blood test, a urinalysis according to Nechiporenko).

Who is at risk?

The maximum likelihood of nitrite in the urine in people at risk:

How correctly to hand over the analysis?

When examining urine, it is necessaryobserve some important rules:

When collecting urine for analysis, you need to take into account the risk of contamination of the sample, so you must first perform a thorough toilet of the external genitalia. Urine should be collected in a sterile container, which can be purchased at a pharmacy or obtained in a laboratory.

If it is necessary to collect the urine of an infant for analysis, special attention should be paid to the purity of the sample. In no case can you collect it from a diaper, because there it is guaranteed to be contaminated with bacteria and foreign impurities. It is also extremely important to observe the hygiene of the child's genitals, especially in boys - infection from under extreme flesh can lead to the fact that the whole sample will be spoiled and the analysis will have to be repeated.

Why do nitrite appear in urine, what does it mean? A positive test for nitrites indicates that bacteria are present in the urine in a significant amount. Gram-negative bacteria, such as E. coli, are more likely to give a positive test.

Proceeding from the above, we can draw the following conclusions:

In some casesit is possible to obtain a false negative resulttest for nitrites:

Women are more likely to get bacteria into the bladder, since they have a shorter urethra. It is easier for bacteria to penetrate into the bladder. Some of the fair sex can face 3 times a year with a similar problem.

Ladies in the position are vulnerable to various bacteria. If a pregnant woman has nitrite in urine, doctors immediately sound an alarm. Any diseases of the genito-urinary tract during this period threaten the normal development of the baby, in general, the bearing of crumbs. Intrauterine infection is dangerous not only for a child's life, but can also lead to death for a woman.

Pregnant women are regularly given a urine test. But not always research helps to identify the inflammatory process in the early stages. For this reason, ladies in the position are encouraged to regularly test for nitrite in the urine of the house.

Nitrite in the urine of a child - what to do?

If the tests found the nitrite in the baby's urine and repeated studies have confirmed this, the doctor will first send the baby to other examinations to make sure there is an infection process. When such chemicals have been found in the body, it is worth consulting with the pediatrician regarding the list of products that are now contraindicated to the child. If there are no allergic reactions, the main emphasis should be made on the use of dietary meat and dairy products.

Nitrites in large quantities can form several bacterial series, including staphylococci and enterococci - and this, in turn, gives rise to a new and more complex infection. For their detection, urine is taken to re-sow.

If your child is diagnosed with bacteriuria (an infectious disease), then the amount of nitrites in his urine exceeds the norm in dozens of times. In this case, as a treatment prescribed a weekly course of antibiotics, they do not allow the spread of the infection to the entire genitourinary system and the kidneys. In addition, as a supplement to treatment, a certain diet can be prescribed, based on the use of boiled vegetables and protein foods.

Nitrite in urine, patients in 8% of the total mass of cases indicate a chronic course of pyelonephritis, about 30% of the pathology is asymptomatic. Cystitis accounts for the lion's share of the increased number of nitrites in the patients urine. Every fifth woman ever encountered this problem. Pathology is accompanied by pain and incision when urinating, increasing body temperature. A complex clinical picture in inflammation of the ureter, it occurs in only 5% of the total mass of patients.

The specific therapy depends on the diagnosed disease. In most cases, the patient is prescribed antibiotics, which destroy pathogens, antispasmodics that stop unpleasant sensations. Further treatment plan varies, given the degree of lesion of the excretory system, the general condition of the affected person.

How to get rid of a cough

Tablets from cough for children from 3 years

Cough in a child 2 years than cure