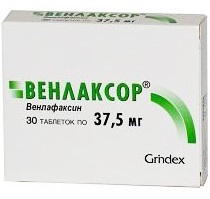 Venlaxor in its structure to any existing group of antidepressants does not apply.

Antidepressant therapeutic effect and mechanism of action on the body and is due to its ability to enhance the transmission of nerve impulses. Both the active substance itself and its metabolite EFA are inhibitors of the reuptake of serotonin and norepinephrine and weak inhibitors of dopamine uptake.

On this page you will find all information about VENLAXOR: the full instruction on the application for this medicine medium, average prices in pharmacies, complete and incomplete analogs of the drug, as well as reviews of people who have already applied Venlaksor. Want to leave your opinion? Please write in the comments.

How much does Venlaksor cost? The average price in pharmacies is at the level of620 rubles.

Tablets of 3, and 75 mg of flat-cylindrical form of light pink in Blister No. 10 in a cardboard pack of 3 blisters.

Venlaksor (venlafaxine) refers to the preparations of the group of antidepressants, derivatives of phenylethylamine, also has an anti-anxiety effect. The chemical structure and pharmacological properties are different from other known antidepressants - tricyclic and tetracyclic, as well as from the anxiolytic means.

The mechanism of action of venlafaxine is not fully understood, at the moment its action is associated with the potentiation of neurotransmitter activity in the central nervous system (CNS). Venlafaxine and its active metabolite, orthodesmethylvenlafaxine, inhibit reverse neuronal seizure of serotonin and norepinephrine in serotonergic and adrenergic synapses of the central nervous system, to a lesser extent - reverse capture of dopamine in dopaminergic synapses.

In vitro studies revealed that venlafaxine has a slight affinity for M-cholinergic receptors, Hi-histamine-receptors and alpha-1-adrenergic receptors. The drug is suitable for long-term therapy.

Attacks of panic with or without agoraphobia, including those requiring long-term treatment. For the prevention of recurrence of attacks or new episodes of depression. 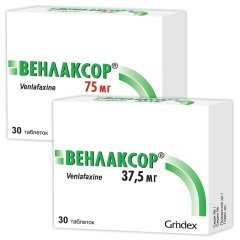 The instructions for use indicate that Venlaxor is taken orally twice a day during meals.

Discontinuation of the drug

At the end of taking the drug VLL, it is recommended to gradually reduce the dose of the drug, at least in for a week and observe the patient's condition in order to minimize the risk associated with cancellation preparation.

The period required to completely stop the drug depends on its dose, duration of treatment and individual patient characteristics.

The occurrence and severity of side effects mainly depends on the dosage of the drug. In the case of a prolonged therapeutic course, the frequency of most of the effects and their severity is significantly reduced. In the overwhelming majority of cases, there is no need to abolish therapy.

Other side effects: often there is a loss of body weight of patients, increased sweating (mainly night). Among infrequent conditions - an increase in mass, ecchymosis. Rarely there is a serotonin syndrome (abdominal pain, diarrhea, nausea, vomiting, hyperthermia, psychomotor agitation, tachycardia, rigidity of muscles, myoclonic cramps, increased sweating, depression of consciousness), as well as the syndrome of inadequate release of ADH. After the termination or ending of therapy occurrence of an abstinent syndrome is possible. In this case, the following symptoms may appear: headaches, dizziness, asthenic conditions, decreased efficiency, sleep disturbances, anxiety, hypomania, increased nervous excitability, depression of consciousness in the form of confusion, violation of skin sensitivity, increased sweating, suppression of appetite, dyspepsia disorder. Most of these symptoms are of minor severity and do not require specific therapy.

Allergic reactions: are observed infrequently. Among them - anaphylactic states, polyiform exudative erythema. Clinical indicators: refer to rare side effects in the treatment of Venlaxor. Mainly it is thrombocytopenia, hyponatremia, prolongation of bleeding time. With prolonged course of therapy using high dosages of the drug, the occurrence of hypercholesterolemia is possible.

Overdose of the drug is indicated by the following symptoms:

When treating Venlacsor, alcohol and other psychotropic drugs are not recommended, since, with an overdose of the drug and the use of the aforementioned substances, cases of lethal outcome are known.

Assistance with overdose: the reception of activated charcoal to reduce the absorption of the active substance Venlaksor. Summoning a vomiting reflex is not recommended. Special antidotes are not defined. The patient is recommended to consult a specialist who will conduct continuous monitoring of breathing and other vital functions of the body. The active substance of the drug and its metabolites EFA are not eliminated from the body during dialysis.

During the appointment and use of Venlaxor it is important to consider:

The period necessary for the complete cessation of venlaxor intake is set individually for each patient based on the applied doses of the drug, the duration of the therapeutic course and individual characteristics patient. 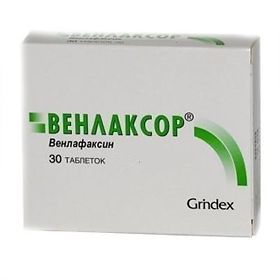 Reviews on the action of the drug in prolonged severe depressive states with phenomenaapathetic, anhedonia, longing, obsessive states are in most cases positive. Patients noted improvement in mood, appearance of appetite, strength, restoration of perception of reality.

Some patients complain of poor drug tolerance and side effects. For a more thorough examination of the effectiveness of the drug should read reviews of Venlaksor on the forums, there are comments of experts.

Can I hang on a bar with scoliosis?

Pain near the navel to the right

Elastic bandage: application, how to reel?