How to treat herpes on the face at home 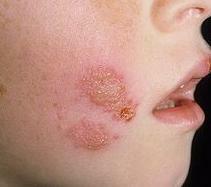 As a rule, herpes on the face manifests itself in the form of specific rashes in the region of the wings of the nose, as well as at the edges of the lips, and it is caused by the herpes virus, which belongs to the first type.

Symptoms of the disease in the form of ulcers and rashes are the source of the spread of the virus, and therefore treatment of herpes on the face should be carried out as early as possible (see. a photo).

The causes of herpes are different, but they basically have one thing in common - reduced immunity.Provoke the appearance of symptomsherpes on the face capable of such factors:

On the face skin, the herpes virus is more often manifested as a cold rash on the edge of the lips, but can occur on the eyelids, in the nasolabial zone, in the auricles.

In general, 6 types of herpes are common, they all have different symptoms, manifestation and development.

A person may not even suspect that he is contagious when the first symptoms have not yet manifested. Therefore, in contact with someone, the patient can infect another person. Then I'll have to treat two.

There are symptoms of herpes on the chin, on the forehead, on the lips - anywhere. First, the patient has a burning sensation in some parts of the skin, there is general malaise and weakness. After a while on the puffy hyperemic base, you can see small bubbles filled with serous contents, which soon becomes purulent.

Then the bubbles burst, from them liquid is released, and in their place erosion areas are formed. The sites of ulceration are gradually tightened with crusts. The focus of the lesion completely disappears only after a week, during which it is necessary to ensure that the infection does not spread to neighboring sites.

How does this ailment look like, we suggest you read the detailed photos.

Treatment of herpes on the face

If there was herpes on the face, treatment should be done with certain drugs. They allow you to quickly cure the disease for several days.

In order to quickly cure herpes on the face, it is necessary at the first symptoms of the disease to begin to regularly massage the itching areas of the skin with anti-herpetic ointment. With a constant presence on the skin and in the subcutaneous tissues, this medicine blocks the multiplication of viral particles, and cells of the immune system gradually cope with those already present. Treatment of herpes on the face with the help of tablets and injections is carried out only with complicated course of the disease.

Unfortunately, the herpes can not be cured completely. The virus remains forever in the body. And it is not only our immune system that does not give us time to show itself. We can only contribute to a more rapid treatment of the manifestations.

How to treat herpes on the face at home? Here are a couple of the most effective folk recipes.

If folk remedies do not help, then it is necessary to use ointments from herpes on the face containing acyclovir, or at all to consult a doctor for the selection of tablets - antiviral and immunomodulating.

Prevention of the disease involves a number of mandatory measures.

To get rid of a person from herpes is never possible. Any treatment has a temporary effect, eliminating the active manifestations of the disease, and initiating the process into the stage of remission.

Injury of the eye: types and treatment

Keratitis of the eye - inflammation of the cornea

© 2022 Symptoms and treatment. All rights reserved