Why cylinders in the urine are elevated, what does this mean? 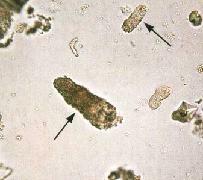 The appearance of cylinders in the urine is called cylilluria. They represent a kind of sediment in the fluid when urinating, having a cylindrical shape.

Different types of cylinders make it possible to recognize diseases of the lower zone of the genito-urinary tract (urethritis, etc.), as well as developing violations of the functional capacity of the kidneys.

Discovered cylinders when passing urine analysis, which include erythrocytes, testify to acute diffuse glomerulonephritis. If bacterial cylinders were detected in urine, this indicates the presence of bacterial pyelonephritis. In addition, the cylinders carry only those harmful microorganisms, which triggered the appearance of the disease.

Cylinders in urine - what does this mean?

What does it mean? The appearance of cylinders of any type in the urine - an alarm signal, indicating that the functional units of the kidneys - nephrons - are under attack.

Formed from denatured protein in the renal tubules under the influence of acid urine reaction. Extremely gentle, pale, transparent formations, under bright illumination, are barely noticeable, for better diagnosis, the sediment can be tinted with methylene blue, gentianiviolet, eosin, iodine tincture. On their surface can be a light granularity due to the deposition of amorphous salts or cellular detritus, which can make it difficult to differentiate from granular cylinders.

Granular cylinders in the urine

This is a mold of the kidney of the kidney, consisting of a protein curdled in acid urine, to the surface of which the dystrophically altered epithelial cells of the tubules attach. As a result of this, Ts. acquire a granular appearance, and their color is darker in comparison with hyaline.

Wax-shaped cylinders consist of a homogeneous, structureless material, similar to wax, yellowish in color; are formed in the distal sections of the tubules due to dystrophy and atrophy (necrobiosis) of the tubular epithelium of these parts, which is usually observed in severe acute kidney damage (for example, in subacute malignant glomerulonephritis) or in the late stage of renal disease and chronic renal failure. Therefore, their detection in the urine is regarded as a prognostically unfavorable symptom.

Particularly characteristic for pyelonephritis, to a lesser extent for lupus nephritis and some other diseases.

They are of kidney origin and appear with necrosis of renal tubules, poisoning with heavy metals. The appearance of these cylinders is the indicator of allograft rejection (a few days after the operation).

Present in the urine with acute progressive glomerulonephritis and some other kidney diseases (kidney infarction, renal vein thrombosis), as well as with polyarthritis, severe hypertension.

Formations of cylindrical form, consisting of mucus. Single cylindroids can sometimes occur in the urine of a healthy person. A significant number of them can be found during inflammatory processes in the urinary tract.

How to Relieve a Sore Throat Quickly

How much does the throat ache in angina