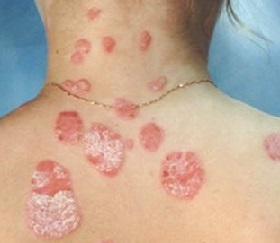 Psoriasis is a known skin disease of a chronic nature that is accompanied by the appearance of raised red spots on which there are silvery white scales. According to statistics, about 3 percent of people from the entire population of the planet suffer from the disease.

The main symptoms of psoriasis are characterized by the appearance on the skin of a monomorphic rash: nodules of bright pink color, covered with silver scales. Elements of the rash can merge into different configurations reminiscent of the geographical map. It is accompanied by a mild skin itch.

As a rule, the disease affects the skin on the head, elbows and knee joints, in the lower back. Also known is psoriasis of the nails, external genital organs and joints, however, these forms are much less common than skin lesions.

The disease can develop at any age, but most often psoriasis affects people of young age. In this article we will tell you everything about psoriasis - symptoms, treatment, diet and folk remedies that will help treat the disease at home.

The cause of psoriasis is unknown, but immunological changes in the body (autoimmune aggression), neurological disorders, metabolic disorders can provoke the disease. Promotes the emergence of psoriasis, heredity, reduced immunity after disease, stress.

One of the main theories of the origin of psoriasis is the hypothesis about the so-called genetic factor. As a rule, psoriasis in children under 10 years is the hereditary form of the disease - in the genus of crumbs, it is almost always possible to find a relative suffering from a similar disease. But if psoriasis manifests itself in a more mature age, doctors assume that the disease has a different nature of origin - bacterial or viral.

Numerous studies have confirmed that psoriasis is not contagious. The presence of several family members suffering from psoriasis is due to a possible hereditary (genetic) transmission of the disease.

There are three stages of development of psoriasis:

It is recommended to consult a doctor if the following symptoms appear: 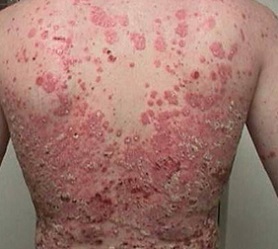 Psoriasis is a systemic disease that affects not only the skin and nails. He suffers from joints, tendons and spine, immune, nervous and endocrine systems. Often affected are the kidneys, liver, thyroid gland. The patient feels strong weakness, suffers from chronic fatigue and depression. In connection with such a complex action on the body, the disease in recent years is commonly called psoriatic disease.

Psoriasis and its symptoms are characterized by the presence of a uniform rash in the form of plaques with a diameter from 1-3 mm to 2-3 cm, pink-red, covered with loose silver-white scales. As a result of the marginal growth, the elements can merge into plaques of various sizes and shapes, sometimes occupying vast areas of the skin. Plaques are usually located on the skin of the extensor surface of the extremities, especially in the area of ​​the elbow and knee joints, the trunk and the scalp.

Symptoms of psoriasis vary depending on the season and stage. Many patients have a "winter" type of disease, in which periods of exacerbation occur at the end of autumn or in winter.

What does psoriasis look like in the initial and other stages in the photo:

Course of the disease

Psoriasis is a chronic disease characterized by a generally undulating course, with periods of spontaneous or remission-induced remissions, or improvements and periods spontaneous or provoked by adverse external influences (alcohol use, intercurrent infections, stresses) relapses or exacerbations.

Often there is a tendency to progression of the disease over time (especially in the absence of treatment), to heavier and more frequent exacerbations, an increase in the area of ​​the lesion and the involvement of new skin areas. Individual patients experience a continuous course of the disease without spontaneous remissions, or even continuous progression. Often the nails on hands and / or feet are also affected (psoriatic onychodystrophy). The defeat of the nails can be isolated and observed in the absence of skin lesions.

For successful treatment it is necessary to take into account the stage of the disease at present - depending on this, the intensity of therapy changes. In addition, the treatment of psoriasis always consists of a whole complex of remedies: external ointments, physiotherapy procedures, general regimen. It is also necessary to take into account other existing diseases, age, sex, the influence of professional factors and the general state of human health.

How to treat psoriasis without the use of medications - the essence lies in the use of cryotherapy, plasmapheresis, and the appointment of systemic photochemotherapy:

On the question of how to treat psoriasis, modern medicine is not able to give a clear answer, so in addition to traditional treatment patients with psoriasis are recommended to adhere to a special diet, as well as to try folk remedies for the treatment of psoriasis.

In the event that the treatment did not give the expected effect, then prescribe ointments on a hormonal basis. Treatment starts with lighter drugs that have minimal side effects. If the improvement was not achieved, then prescribe a stronger ointment with glucocorticosteroids.

What kind of sanatoriums are there?

For the rehabilitation of patients with psoriasis at the resorts use: mud treatment, mineral waters, treatment with fish, light oil fractions and physiotherapy procedures. Sea water, warm climate also have a powerful influence.

Russian resorts that specialize in the treatment of psoriasis patients: Sochi, Anapa, Gelendzhik. A mild subtropical climate, plenty of sun and long sea bathing have a beneficial effect on the condition of the skin, nails and joints. Sanatorium Elton near Volgograd (mud cure), sanatorium Assy near Ufa offers a complex of physiotherapy procedures and clean air.

What can be done at home?

It is important to understand that the success of therapy largely depends on the actions of the patient himself. That is why people suffering from psoriasis are recommended to completely change their lifestyle and make every effort to create favorable conditions for recovery.

In particular, patients are recommended:

How to treat psoriasis with folk remedies

At home, you can use many recipes of traditional medicine that will help to treat psoriasis. Let's consider some of them.

Psoriasis can not be cured. Modern medicine does not offer a single medicine that can cure psoriasis once and for all. However, if it is treated with medications and other methods, then a rather unstable remission can be achieved.

To say clearly which diet for psoriasis will be most effective is difficult. The fact is that in addition to foods that are undesirable for consumption or useful, individual tolerance of the same food products correlates in different patients.

In this regard, for each person suffering from psoriasis, specific recommendations are given. The recommended form of nutrition provides for the rejection of certain products, but provides a balanced diet that supplies the body with all the necessary substances.

What you can not eat with psoriasis:

Food for psoriasis should be rich in fatty acids, which are abundant in fish. The essence of the disease is this: a failure in the activity of the immune system provokes the body to produce more and more skin cells without having to get rid of the old ones. As a result, skin cells are layered and glued, there is itching, irritation, peeling.

Why the immune system behaves in a similar way is unknown. Doctors say one thing - psoriasis is incurable, so it is not the illness itself that is to be fought, but its manifestations.

Quality of life of patients

It has been shown that psoriasis can worsen the quality of life of patients to the same extent as other serious chronic diseases: depression, a previous myocardial infarction, hypertension, heart failure or type 2 diabetes mellitus. Depending on the severity and localization of psoriatic lesions, patients with psoriasis may experience significant physical and / or psychological discomfort, difficulties with social and professional adaptation and even need disabilities.

In a survey of the American National Fund for Psoriasis, which was held in 2008 and covered 426 psoriasis patients, 71% of patients reported that the disease is a serious problem of their daily life. More than half of patients noted a significant fixation in their appearance (63%), fear of looking bad or being rejected by others because of the presence of psoriasis, a sense of embarrassment, shame or embarrassment when communicating (58%). More than one-third of patients reported that with the onset or progression of the disease, social activity and communication with people or limited the search for partners and intimate relationships because of illness.

Strong skin itching or pain can interfere with basic life functions: taking care of oneself, walking, sleeping. Psoriatic plaques on open parts of the hands or feet may prevent the patient from working on certain work, engage in some sports, take care of family members, pets or home. Psoriatic plaques on the scalp often present a special psychological problem for patients and cause significant stress and even social phobia, since pale plaques on the scalp can be mistaken for those who surround themselves for dandruff or the result of having lice.

An even greater psychological problem is the presence of psoriatic eruptions on the skin of the face, ear lobes. Treatment of psoriasis can be expensive and take a lot of time and energy for the patient, interfering with work, study, socialization of the patient, the device of personal life.

The prognosis for life in psoriasis is conditionally unfavorable, the disease is chronic, slowly progressive, timely and adequate treatment only increases the quality of life, but does not eliminate the disease itself.

During periods of exacerbation, disability is observed. In the absence of adequate medical care, disability can result.

Pain in the left hypochondrium after a meal